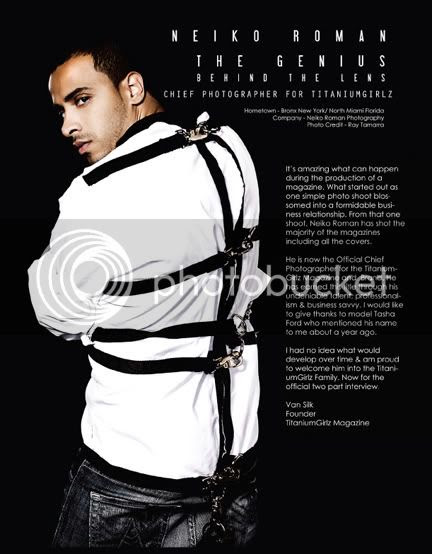 1) What name do you go by?
Neiko Roman. For my glamour work I use to go by Vizionz Photography. Now I just use my name for any photography work I do.

2) What is it that your best known for?
Neiko Roman - I’m mostly known for my glamour work. It’s what got my foot in the door as far as shooting goes.

3) How long have you been a photographer? and how did you get started?
Neiko Roman - I have been shooting professionally for 3 years. Before that, I assisted photographers for about 3 years on and off. As far as getting started, I dabbled with photography back in high school but I didn’t pursue it seriously until I went to college and decided I really didn’t like my original major so switched majors to photography and stuck with it since.

4) Where can people see more of your work?
Neiko Roman - My website neikoroman.com, myspace.com/neikoroman. TitaniumGirlz magazine and other publications. 5) Who are some of the models you've have worked with?
Neiko Roman - I worked with Lyric, Sundy Carter, Angel, Mileena Hayes, Milani, Maria Vaz, and a bunch of others. 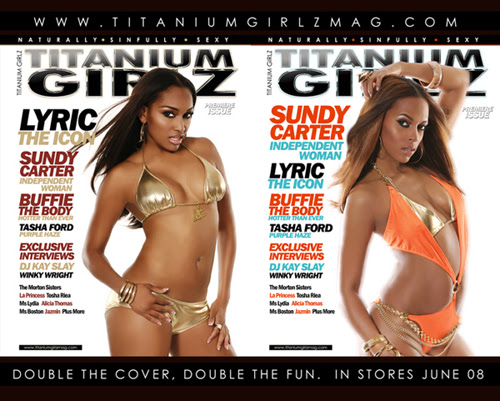 6)Wow you mention some big names! What are a few of your favorite shots?
Neiko Roman - Actually the cover of TitaniumGirlz magazine with Sundy and Lyric are a couple of my favorites. The implied nude with Mileena Hayes laying on her back is another one I really like. I also have a close up image of a girl with with wet hair coming down her face. That’s one my favorites and it wasn’t planned. We were just chilling at the beach and decided to take some shots.

7) A almost nude Mileena Haynes is always a good thing! lol without giving any names have you ever had a bad photo shoot and if you did what happened?
Neiko Roman - As an assistant there were a few but as a photographer only one comes to mind. I had a cover shoot with 3 models from the same agency. We decided on one particular girl in the middle only because the other 2 girls photograph similar and we needed balance. One of the girls that wasn’t in the center wasn’t happy and asked why she wasn’t in the middle. We explained why and she still gave nasty attitude and kept messing up expressions as we shot. So I decided to take her out and we shot one of the other girls for cover instead. I don’t have patience for haters and bad attitudes so if I have the power to make a decision on who stays and goes then behave while on my set.

8) I second that that! Hi haters! To stay in the biz at your level you would have to be focused. What are some of your goals?
Neiko Roman - Short term goals are to do more celebrity work and high fashion. Also ad campaigns. Long term I would like to do a few coffee table books and get into directing music videos and maybe be a director of photography on some motion picture movies.

9) And if you ever need any Actors or Behind the scenes help holla at me! Watch me get my Denzel on!!!! What are some things that keep you motivated to keep doing what you do?
Neiko Roman - I am a student of the art. Now matter how long you do photography there is always more to learn. Plus I’m never satisfied and havn’t accomplished anything close to were I want to be.

10) What does your normal working day for you consist of?
Neiko Roman - If I don’t have a shoot scheduled then I go through my emails and messages and work on my marketing. I also do some retouching on the recent shoots I did. Negotiate for possible jobs. My normal day on non shootings days is about 10 hours and on shooting days it’s about 14 hours. (That includes me cleaning up the studio and putting away my equipment)

11) Is there any advice that you can give to up and coming models and photographers?
Neiko Roman - Learn the business side of it. I know it looks all glamorous and fun but it is a business and those that realize that earlier on have a better chance of surviving in this highly competitive field.

12) Do you have any other projects that your working on?
Neiko Roman - I am closely involved with TitaniumGirlz magazine. We have a lot of hot ideas That havn’t been done before. Be on the look out for the Rookie girl issue out in October and the Holiday issue featuring Esther Baxter, Gloria Velez and Brooke Bailey out at the end of November. and again thank you for taking the time to complete this interview!
Neiko Roman -Thank you.
Posted by Unknown at 11:51 AM